We have chosen to support this program as part of demonstrating our commitment to being active allies for First Nations peoples in Australia. We wanted to support a program that is led by local Elders at a grassroots level.

We knew this program was the one for us because our founder, Renée Hasseldine, wrote her book on Gunai Kurnai land and the program is led by proud Gunai Kurnai man, Ricky Baldwin.

We are proud to be a Social Impact Partner, and will support this program in the following ways:

Each 2 day Sports and Culture Camp for 30 Indigenous and Torres Strait Island children costs $9,110 to run. To sponsor a single child costs $310.

Our first goal is to fund at least one camp, through our contributions and fundraising efforts. 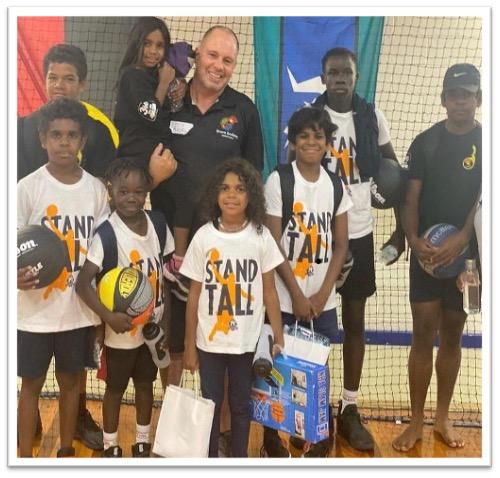 Funds raised will be used to run programs that engage with and empower the younger generation of Aboriginal and Torres Strait Islanders through basketball and cultural activities that allow kids the opportunity to play sport and also learn about their own culture and identity.

These Sports and Culture programs will incorporate basketball skills and drills, health and wellbeing advice and cultural education and activities. The program will:

The program will be hosted in conjunction with community Aboriginal Elders and in partnership with local Aboriginal and Torres Strait tribes and representative groups, the Local Government Authorities and local basketball associations across Australia. Ricky is a proud Gunai Kurnai man who has been advocating for his people to have access to the same opportunities as everyone else for more than 20 years. His passion lies in giving Aboriginal and Torres Strait Islander children and young people opportunities to participate in and compete in sport, to learn about their cultural heritage and connections to country, and to build the knowledge, skills and resources they need to successfully engage in education and employment opportunities.

A very promising young basketball player who possessed an exceptional talent and was able to play at an elite level – with the right support Ricky could have taken his basketball career all the way to the NBL. But unresolved trauma from his past continued to manifest itself as anger throughout his early years.

It was with the support of Elders and a psychologist that he was able to reconnect with his culture and understand that his anger did not represent who he was, but rather was due to the trauma he had suffered. Besieged by anger and hurt for too much of his life, in the end these feelings became the light that showed Ricky where his true strengths lied, the healing power of his resilience, and the sense of responsibility that fundamentally sums up his overarching goal in life – doing all that he can to ensure no other Aboriginal or Torres Strait Islander child feels as lost and alone as he did.

On a national scale, Rick’s coaching and advocacy has afforded his community many wins that continue to go largely unrecognised. In 2019, he was Head Coach of the Australian Indigenous Women’s team. He has coached hundreds of basketball teams in his career, including many junior teams. As a Coach, Rick has developed very strong relationships with many young people and he continues to mentor them into their adulthood. What drives his passion to mentor Indigenous kids is to provide them with a sense of hope and self-determination that he never had for himself growing u

Can you help us help Ricky and young Indigenous people?

Donate now. Or just by choosing to work with Think RAPT, 5% of every dollar you spend will be donated to Koorie Academy.